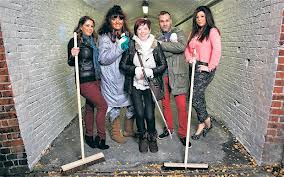 The compulsive cleaners are individually teamed up with someone whose house is in desperate need of an overhaul. In this episode, cleanliness obsessive and Jenny stravel to a help a woman who hasn’t cleaned her flat in over a year. Also, Penny, a fellow OCD sufferer gets to work in the house of a compulsive hoarding obsessive whose habit is turning his family home into a cluttered danger zone. His love for figurines is putting on a big strain on his marriage – but will he part with his “penion investment?”

Sufferers of OCD who are obsessed with cleaning may be unable to rest or even relax if there is much as a speck of dust on the carpet or a smudge on a mirror. Gambling, shopping and other addictions where there is no substance abuse are all compulsive behaviours. The natural high produced by endorphin release is similar to the feelings and addict looks to replicate by substance abuse. Both are equally addictive.

Obsessive Compulsive Disorder has been shown to exhibit many of the same symptoms and benefits from similar approaches in rehabilitation treatment. Both addiction and OCD are primarily psychological disorders. OCD and addiction have clear links and OCD sufferers may be more likely to develop substance addictions. Both are considered conditions where the chance of relapse is high. Neither can be cured in the traditional sense. These conditions may be arrested, but both an addict and someone with OCD will have two develop ways of dealing with their cravings or obsessive behaviours for the rest of their lives.

A Yale study has shown both those suffering from OCD and addiction has a lot in common and linked. Despite knowing that their behaviour is detrimental to their health, they may be powerless to stop. The show is a disconnection between basic behaviour and knowledge which was demonstrated in the study’s decision making tests. These tests used tests to examine the short term reward factors – both addicts and those with OCD may have little will power in certain aspects and may have little regard for the future and possible harmful consequences. This powerlessness over their condition is a key clinical feature of both addiction and OCD.

OCD has even been used as a useful barometer in predicting addiction. The similarities of brain and cognitive impairment do have subtle differences but are both regulated by the frontal lobes of the brain. It’s these sections of neurotransmitters that control both common aspects of these behaviours. Treatment approaches are often very similair and both involve addressing the routine of habits and encouraging longer term gratification. This usually involves Cognitive Behaviour Therapy to break routine behaviour and counselling to address the reasons behind the addiction or compulsion. Both can be treated successfully with rehabilitation treatment.