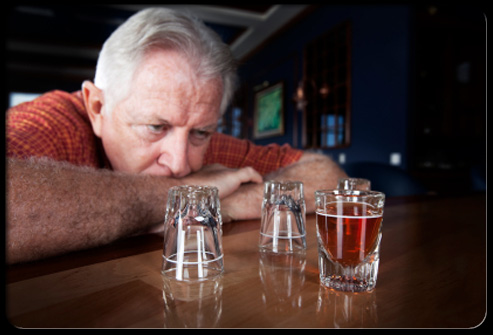 Depression and alcoholism are often found together. Someone who is depressed may think they feel better after a few drinks, but any temporary mood lifting properties are exactly that. Alcohol is in fact, a depressant. The drinker may think that having a few glasses of wine will make them feel better but these beneficial effects are short lived. Alcohol affects the nervous system, and can trigger or exacerbate depression. Alcohol does not mix well with depression and is best avoided especially if antidepressants are being used as there are many dangerous contraindications.

Many people self medicate with alcohol to treat depression. Studies show that the amount of alcohol consumed has doubled in the last 50 years. It is reckoned 10% of Britons drink every day. That’s around 5 million people regularly consuming dangerous amount of alcohol. Many assume alcohol is a problem mostly amongst the younger generation, but this is a misconception. Only 3% of 18 to 34-year-olds drink every day compared with 15% of over 55’s.

The 10th of the population who drink daily were most likely to report drinking to relieve anxiety and depression and feel that they would be able to stop drinking easily. Those suffering from psychiatric disorders are twice more likely to become alcoholics than those who do not. Alcohol can make depression seem so much worse and it is a sad fact that 70% of men who commit suicide have been drinking before committing this tragic, final act.

Official government figures show that 38% of men and 16% of women drink more than the recommended guidelines whilst over 1 million people in Britain are addicted to alcohol. People drink a variety of reasons but drinking to forget problems doesn’t work as alcohol inevitably causes more. Alcohol weakens brain function and exacerbates anxiety and low mood.

Nearly 40% of heavy drinkers display symptoms that are very close to those of depressive condition. It’s interesting to note that when these same people moderate or abstain from drinking 10% of women and only 5% of men still have symptoms that meet criteria for diagnosing depression-which are in line with figures concerning rates of depression for the general population.

This clearly shows that the link between drinking and depression is a strong one. If you suffer from depression then it may be helped by giving up drinking. It is difficult to give up drinking alone and for a very heavy drinker, can be dangerous. The body is placed into shock when a heavy drinker stops drinking suddenly and this can have serious health consequences. If you or someone you know has a problem with alcohol then it’s better to seek help as soon as possible. Many people who are addicted to alcohol will not admit it, but deep down they know they have a problem. When someone who is depressed is also suffering from alcohol addiction specialist treatment is required to treat both conditions. The first stop should be a GP or an assessment at a private rehab clinic. No one should suffer alone as depression and alcohol use can spiral out of control quickly.