Bulimia – exercising with an eating disorder 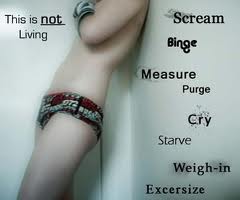 Bulimia is an eating disorder which is characterised by bingeing and purging. Someone suffering from bulimia may eat large amounts of food and then try and counteract the effect of their calorie intake by making themselves sick, use of laxatives or excessive exercising. Bulimia is a disease connected with poor self image and often, a desire to lose weight but does nothing in the long term to enhance appearance or health.

The side effects of bulimia

The impact the continuous bingeing and purging has on the body may not be noticeable immediately, but just because you can’t see them doesn’t mean they are not happening. The hair, skin, teeth, bones and muscles deteriorate as the disease continues to take its toll.

The cycle of bingeing and purging by self induced vomiting, laxative abuse and obsessive exercising means that the digestive system is constantly in a negative state of flux. As the sufferer continually empties the stomach the body doesn’t receive the nutrients that it needs to function correctly. Those suffering from bulimia may also suffer from anaemia, dehydration, malnourishment and electrolyte imbalance.

Bulimia and the muscular system

The chemical imbalances caused in the body by bulimia means that muscles do not get the energy that they require to function properly. Exercising will do little to increase muscle mass or improve muscle tone as they do not receive the correct messages from the brain and muscles will weaken and to generate. The muscular system will listen and muscles can even go into cramps and spasm. Apart from the obvious pain and discomfort, sufferers of bulimia may feel lethargic, lacking energy and feel weak and fatigued.

All the systems of the body must work together but bulimia stops the body from functioning correctly. Bulimia can also have a negative impact on the skeletal system, as the lack of nutrients available to the body mean that bones do not receive the nourishment that they need to maintain their strength. Over time, the polemic may suffer from osteoporosis. This is especially common in women as they hit the menopause, and if they have a history of bulimia or any other eating disorder they may find that the symptoms can be quite severe. It is important to consider the effects of bulimia have not just on short term health, but the problems that could be stored up to the future too.

Exercise routines will also be negatively affected by the constant bingeing and purging. Food is a few which the body uses to run on and without this exercising can be difficult. Energy levels will be reduced and little retirements will be seen on the air for put in at the gym. Protein is required to build muscle and as the body is starved of food, nutrients and amino acids, and just as you cannot build a house without bricks, you cannot build muscle without these essential building blocks.