Chlordiazepoxide – often sold under the trade name Librium – is a sedative and hypnotic medicine in the benzodiazepine class. A class-C controlled substance in the UK (illegal to possess without a prescription), chlordiazepoxide – chemical formula C16H14ClN3O – is usually provided in tablet form for oral consumption, though can also be given intramuscularly.

Chlordiazepoxide is most commonly sold under the trade name Librium; other brand-name drugs consisting wholly or in part of chlordiazepoxide include Mitran, Poxi, Libritabs, Limbitrol, Limbitrol DS, Librax, Clindex, and Chlordinium.

What is Chlordiazepoxide Addiction?

Addiction – a much misunderstood concept – is a disorder of the brain’s reward system in which the repeated engagement in specific behaviours (in this case, the consumption of chlordiazepoxide) leads to the compulsion to repeat such engagement despite an awareness of any negative consequences of doing so. Addiction is frequently mistaken for (though often related to) dependence (see below); consuming chlordiazepoxide of time increases the risk of both addiction and dependence.

What is chlordiazepoxide used for?

Chlordiazepoxide is most commonly prescribed for the short-term treatment of serious (severe and disabling) anxiety and distress. It is also prescribed to treat acute alcohol withdrawal syndrome, and sometimes to ease the symptoms of irritable bowel syndrome.

How addictive is chlordiazepoxide?

Dependence occurs when someone consuming a certain substance (in this case, chlordiazepoxide) for a period of time becomes used to the presence of a certain quantity of that substance in their system (specifically in this case, the brain and central nervous system). The system then adjusts to that presence and rapidly becomes reliant upon it for normal functioning.

Subsequent to the development dependence, the withdrawal of the substance in question from the system – i.e., if the affected individual stops taking the drug – will result in the abnormal functioning of the brain and body and the manifestation of a variety of distressing and potentially dangerous symptoms comprising the condition known as withdrawal syndrome.

As mentioned above, dependence and addiction are closely related. Chlordiazepoxide dependence is a primarily physiological response to the adjustment of the individual’s system to the presence of chlordiazepoxide; addiction, meanwhile, is a fundamentally psychological phenomenon by which an individual is driven to repeatedly consume chlordiazepoxide. Addiction does very frequently include dependence, but can occur without any physical dependence manifesting.

Genetic: anyone with a family history of substance abuse and addiction and/or any other variety of mental health disorders is a particular risk of developing a chlordiazepoxide addiction.

Addiction is not yet fully understood phenomenon, in the sense that we do not know why one person may succumb to an addiction where someone else in very similar circumstances might not. It is certain, however, that both genetic and environmental factors play a role, and that key to the development of addiction and dependence is the consumption of chlordiazepoxide regularly over time.

Because of its role in the treatment of certain mental health disorders, chlordiazepoxide is often an element of cases of dual diagnosis (when substance abuse disorders occur alongside other mental disorders). Dual diagnosis usually complicates the treatment of addiction significantly, and specialist expertise is typically required.

The Effects of Chlordiazepoxide Addiction on the Brain

Chlordiazepoxide – like other benzodiazepines – acts by stimulating receptors in the brain linked to a neurotransmitter known as GABA (gamma-Aminobutyric acid), primarily responsible for having a calming effect upon the brain and central nervous system. Chlordiazepoxide addiction can interfere with the normal functioning of GABA and processes related to it, and withdrawal can disrupt that normal functioning considerably, causing the manifestation of various unpleasant and potentially dangerous symptoms (withdrawal syndrome). Long-term chlordiazepoxide abuse may well have permanently damaging effects upon the brain and central nervous system.

Relationship between Chlordiazepoxide and Other Substances/Contraindications

Chlordiazepoxide should not be prescribed to anyone suffering from any of the following conditions:

Caution is advised when prescribing benzodiazepines to pregnant women or those trying to conceive.

Due to its impact upon an addict’s quality of life and prospects, addiction generally is known to have potentially devastating consequences for an individual’s physical and mental health. Long-term chlordiazepoxide consumption and abuse specifically has been proven to have a variety of health risks, outlined below.

Alongside any intended consequences, chlordiazepoxide consumption has a range of potentially dangerous and/or unpleasant short-term effects, including:

Along with the development of dependence and addiction, chlordiazepoxide is associated with a number of risks including learning impairment, memory problems, and chronic depression, and may be a factor in long-term neurological damage.

Along with some of the physical effects listed above, some signs which might betray the abuse of chlordiazepoxide include: regular intoxication (with symptoms including slurred speech, impaired motor control and drowsiness); enhanced levels of intoxication when consuming alcohol; a preoccupation with obtaining and consuming chlordiazepoxide; visiting multiple doctors to obtain prescriptions (“doctor shopping”); withdrawal symptoms manifesting upon cessation of use; and long-term symptoms including cognitive impairment, anxiety, insomnia and depression.

Cost of Chlordiazepoxide Addiction to Families and Society

As with any addiction, chlordiazepoxide addiction can destroy families:

the strain of having to witness the struggles and health issues of addicted loved one, and dealing with that loved one’s deceitful and manipulative behaviour, can prove too much for even the most loving family members. Socially, chlordiazepoxide addiction costs the NHS millions of pounds in addiction treatment, and requires the deployment of substantial police and social health resources that could otherwise go elsewhere.

Benzodiazepines are frequently abused by young people due to their comparative ubiquity and low cost. If you think a young person close to you could be abusing chlordiazepoxide, speak with an addiction specialist immediately.

It can be terrible watching someone you love struggling with an addiction of any kind, and it is understandable that you would want to intervene immediately. However, doing so could exacerbate the situation and end up alienating you from your loved one. Get in touch with an addiction specialist to discuss your situation, and to get advice on the correct next steps. Above all, prioritise your own safety and that of others.

What to Do if You Need Help to Detox

Benzodiazepine withdrawal can kill: it is vital that you do not attempt to detox from chlordiazepoxide dependence without getting the correct medical support, regardless of how desperately you may wish to stop taking chlordiazepoxide. Get in touch with your GP and/or an addiction specialist to find out more, and to discuss how you might detox safely

Some of the most frequently observed symptoms of chlordiazepoxide withdrawal include:

Withdrawal from chlordiazepoxide dependence usually last between two and four weeks, with the symptoms of acute withdrawal kicking in roughly three days after the last dose and typically lasting up to a week. It is important to note that this is simply a rough guide: some people experience cases of withdrawal lasting significantly longer than this given timeframe. Furthermore, some go on to develop a condition known as protracted, or post-acute, withdrawal, in which symptoms can be sustained for months or even years.

As discussed above, benzodiazepine withdrawal can be extremely dangerous. If you are suffering from a chlordiazepoxide addiction, do not attempt to detoxify independently: it could kill you. Get in touch with your GP and/or an addiction specialist to discuss the medical assistance you may be able to obtain.

There are now many facilities operating around the country treating chlordiazepoxide addiction. All addiction treatment usually consists of two primary phases: detoxification and withdrawal (with medical help); and therapy.

Like every addiction treatment, therapy is at the heart of the treatment of chlordiazepoxide addiction. Only therapy can reveal and address the root psychological causes of any patient’s addiction, and going through detoxification and withdrawal without tackling these more fundamental issues is likely to prove futile in the long term, as the individual in question lapses back into substance abuse and addiction. Addiction therapy is provided in a wide variety of formats and methodologies, and in both one-to-one and group environments. 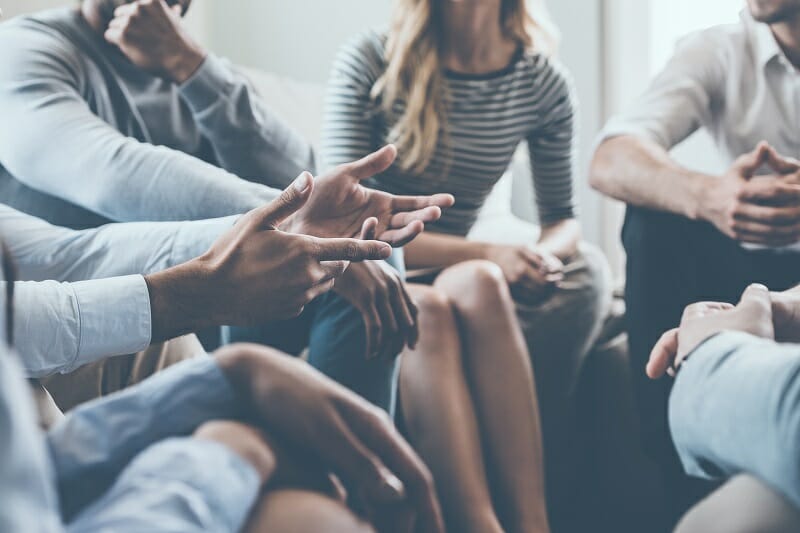 Different treatment facilities may provide different detoxification processes, and one patient’s experience may differ from another’s: for example, some patients may be required to taper down their chlordiazepoxide consumption prior to starting detox; others may be prescribed particular medications, where still others are not. If you are thinking about going through chlordiazepoxide detox, get as much information as you can from your doctors so you know what to expect.

Because of the danger associated with detoxification from benzodiazepines you must be completely candid with doctors, including any rehab facility professionals, about your medical history, physical condition, and the severity and duration of your chlordiazepoxide abuse, so as to reduce the likelihood of any dangerous complications during your treatment.

Fighting against relapse is an ongoing process: although avoiding relapse is fundamental to recovery, if you do relapse this does not mean that you have totally failed in that recovery, and that you will inevitably resume your addiction. You can get psychological defence mechanisms and relapse prevention tools from therapy, including the kind provided in rehab. Throughout your recovery, you can benefit from participating in self-help groups and engaging in counselling. Talk to an addiction specialist about viable relapse prevention strategies.

Ready To Get Help?

Addiction is a terrible affliction which can ruin lives, and chlordiazepoxide addiction is no exception. It is true that no addict can truly be helped unless they can recognise their addiction and bring themselves to reach out for such help. However, if you have reached that stage there are plenty of treatment options available to you.

You may feel that the prospect of tackling your addiction is an overwhelming one – but the alternative can only be worse. Do not let addiction do any more damage: take back control of your life and start your recovery today.

If you are suffering from an addiction of any kind, it is vital not to waste any more time before addressing it. Speak with your GP and/or professional addiction specialist today to examine the treatment options which may be appropriate for you.