Modafinil – sold under various trade names including
Provigil, Alertec, Alertex, Altasomil, Aspendos, Forcilin, Intensit, Mentix, Modafinilo, Modalert, Modanil, Modasomil, Modvigil,Modiodal, Modiwake, Movigil, Resotyl, Stavigile, Vigia, Vigicer, Vigil, Vigimax, Wakelert and Zalux – is a eugeroic (“wakefulness-promoting drug”) with the chemical synonym diphenylmethylsulfinylacetamide. Modafinil is primarily used to treat sleepiness resulting from narcolepsy, obstructive sleep apnoea, or shift work sleep disorder; it is also occasionally used in the treatment of addiction, specifically to cocaine, amphetamine and other stimulants. Because of its eugeroic qualities modafinil has also been used as a performance-enhancing drug and is on the World Anti-Doping Agency’s prohibited list.  Usually taken in tablet form, in the UK it is a prescription-only medication.

Although modafinil’s role in the treatment of addiction is still developing, and it is used comparatively infrequently, it is seen as being effective in the treatment of addiction to stimulants including cocaine, methamphetamine, amphetamine and others in a similar way to that in which methadone is used to treat opioid use disorder – that is, as a legal and less harmful substitute, and to alleviate certain withdrawal symptoms. Research into modafinil’s effectiveness is ongoing, but it has been observed to increase the number of drug-free days attained by patients, and to reduce the intensity and frequency of cravings.

Modafinil is a dopamine reuptake inhibitor, meaning that dopamine (a chemical associated with sensations of pleasure and well-being) remains active for longer and at higher levels in the brains of individuals who have taken modafinil and who would otherwise experience lower than average levels of dopamine, with consequent dysphoric effects; it is thought to have similar effects upon levels in the brain of noradrenaline and serotonin, similarly associated with feelings of pleasure and contentment. Modafinil also increases wakefulness, having stimulant effects similar to (though less pronounced than) those of cocaine and amphetamine.

These stimulant effects and its impact upon dopamine levels, combined with its comparatively very limited addictive qualities, mean that modafinil may be used to substitute for cocaine and other illicit stimulants in addicts undergoing treatment; dosages can be reduced over time (tapering) making withdrawal and detoxification significantly less problematic and distressing, and reducing the frequency and intensity of cravings, making relapse much less likely.

Is Modafinil Effective at reating Addiction?

As noted above, the use of modafinil in addiction treatment is still comparatively in its infancy; however, it has been seen to increase the number of drug-free days in stimulant addicts, as well as having a positive impact upon cravings.

As with any medication used to treat addiction, modafinil should not be seen as a cure in and of itself; rather it should be combined with therapy and other elements of a holistic 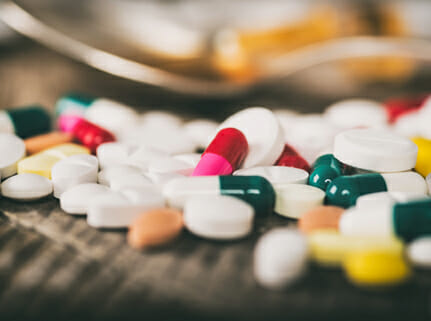 addiction treatment plan. Because of side-effects associated with modafinil, the potential for overdose, and a low but extant potential for addiction, it should only ever be taken in accordance with the instructions of the doctor prescribing it.

What are the side effects of Modafinile?

Some side effects associated with the use of modafinil include headaches; nausea; nervousness; insomnia; dizziness; anxiety; diarrhoea and other gastrointestinal problems; skin rashes; high blood pressure; dry mouth; and loss of appetite.

Is Modafinil Most Effective When Combined with Addiction Therapy?

As with any medication used in the treatment of addiction, modafinil is not itself a cure for addiction and should only be considered as part of a holistic addiction treatment programme (such as that provided at a residential rehabilitation – “rehab” – facility). The core of all addiction treatment is psychotherapy (in any of various models and settings), which unlike medication both reveals and addresses the fundamental causes of addiction, as well as providing addicts with psychological defence mechanisms against relapse.

Although modafinil has been observed to boost the number of drug-free days experienced by stimulant addicts being treated with it, as well as to decrease the intensity and frequency of cravings, its use does not tackle the root causes of addiction, and an individual patient prescribed modafinil but not provided with the appropriate therapy will have addressed only the superficial aspects of their addiction, rather than the factors causing it in first place.

If you are struggling with addiction, and are prepared to acknowledge your condition and ask for help, do not allow any more time to pass: pick up the phone today call your GP and/or an addiction specialist to discuss your situation and investigate the treatment options which might be most appropriate for you.